eSports is a misunderstood industry. Brands have long underestimated its enormous potential for growth, and members of the community have continued to undersell their own value. It’s a rapidly growing market, a multibillion dollar industry in the making, which appeals to an enthusiastic, engaged and increasingly diverse audience of digital natives. Old stereotypes no longer hold true, this community is made up of more than just anti-social teens and manchildren, confined to their parents’ basements, subsisting on Cheetos and Mountain Dew alone.

As conversation around eSports continues to grow, the audience it attracts is becoming more diverse. Female engagement with eSports is on the rise, with 25% of the conversation now led by female fans. These developments are also having an impact on the sport itself, with the number of female teams and female players increasing.

It isn’t difficult to see why more people are pursuing careers within the eSports industry, top eSports players are earning millions of dollars in a single tournament. The prize pool at the Dota 2 International Championships hit the $5 million mark in 2014, and the 2015 League of Legends World Championship attracted an audience of 26 million worldwide, beating out the American NBA Finals in terms of viewership. Chinese megacorporation Tencent gave the industry their seal of approval back in June 2017 when they announced plans to invest $15 billion in eSports over the next decade.

It’s no wonder more and more brands are getting involved, but it’s also clear that not everyone has done their homework. The eSports ecosystem is complex, made up of many different micro-networks related to different games and teams. In order to win favour with eSports aficionados, brands must take the time to understand the different networks and influencers that make up these micro-communities. Authenticity is key to establishing long-term relationships with micro-influencers and engaging with fans of the sport. 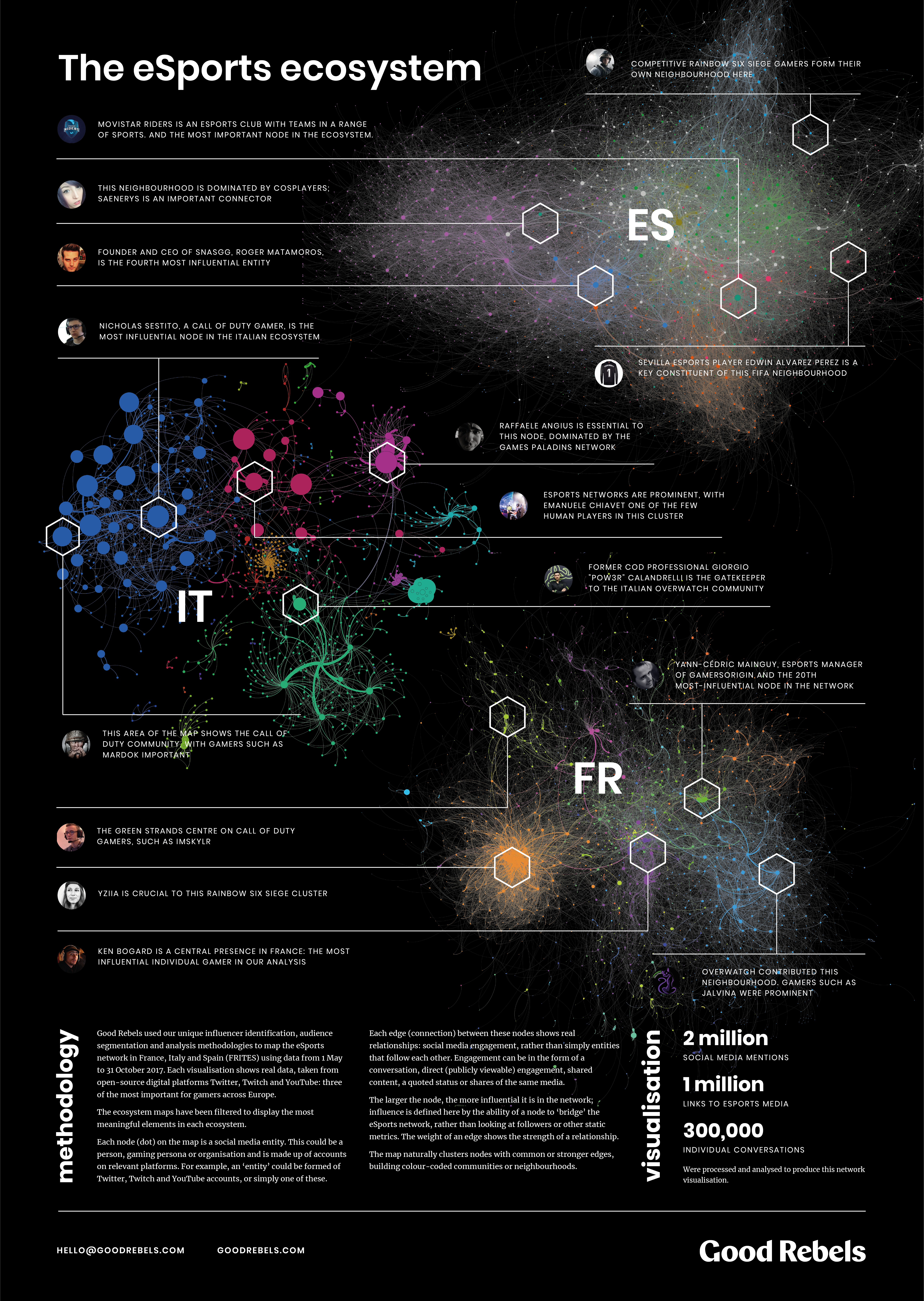 We created this visualisation to demonstrate the complexity and multi-faceted nature of the communities within the eSports ecosystem. Utilising unique influencer identification, audience segmentation, and analysis methodologies, we were able to map out the eSports network in France, Italy and Spain. Two million social media mentions, one million links to eSports media, and 300,000 individual conversations were processed and analysed in order to produce the above network visualisation. Each element on the map above shows real data, taken from Twitter, Twitch and YouTube. Each node (dot) on the map represents someone or something of significance on social media – a person, gaming persona or organisation. Each edge (connection) between nodes shows the relationship between the two – based on social media engagement as opposed to just whether or not they follow one another. The larger the node, the more influential it is within the network. The weightier the edge, the stronger the relationship.

This network visualisation is designed to convey the complexities of the eSports ecosystem and the many different and distinct micro-communities within it. Failure to understand these communities could spell disaster for any brands looking to invest in eSports. Case in point, Bud Light All Stars.

In 2016, the American beer brand Bud Light ran a promotion in which they asked eSports fans to vote for their favourite of twenty eSports players, selected by the brand, to become one of five Bud Light All Stars. The campaign took place over Twitter and in general, the response was lukewarm. Soon after the announcement was made, Steve Jurek of Dot eSports criticised Bud Light for what he, and many others, saw as a cynical and lazy attempt to capitalise on an emerging market without investing time to properly understand the audience. “Bud Light All Stars already feels like a failure,” Jurek wrote, “it’s a brand ambassador search poorly disguised as a campaign to find the best-of-the-best.” Further criticism came from theScore eSports, who gave Bud Light an F for effort, based mainly on Bud Light’s selection of twenty “relatively low impact” players. Bud light had restricted their selection by age (21+) and location (North American), effectively disqualifying the majority of top global players.

The Bud Light All Stars campaign could have been a success but it was poorly executed. Ensuring an in-depth understanding of your audience and sourcing quality, data-led insight is crucial when identifying influencers or brand ambassadors.

In 2017, Bud Light revived the campaign with Bud Light All Stars 2.0 which, by all accounts, was far more successful. However, American fast-food chain Arby’s beat them to it by about a year.

In May 2016, Arby’s, along with casual dining brand Buffalo Wild Wings, became sponsors of Turner’s professional eSports league, ELeague. Arby’s produced a series of short and sweet TV and Twitch spots. One example, which featured Arby’s sandwiches being blown up by CS:GO players, made reference to ‘Rush B’, an in-joke amongst CS:GO fans. Their use of specific, niche terminology demonstrates a real understanding of their audience. Arby’s clearly did their research and received a warm response from fans as a result.

“The ELeague partnership offered us a unique opportunity to be a part of building a program for eSports and CS:GO fans that would be truly integrated and engaging rather than a boilerplate ‘sponsored by’ program,” Jeff Baker, VP of Brand Experience at Arby’s, explained, “The fan response has been overwhelmingly appreciative of our authenticity and respect for the game, teams and players. We have absolutely loved reading the fan comments on Facebook, Twitter, Reddit etc.”

Through a series of ads, Q&A sessions with fans and players, giveaways, and a sponsored food truck at the 2016 ELeague Championship Weekend, Arby’s succeeded in opening themselves up to a global digital audience of over 25 million. However, at an annual cost of $2 million, eSports sponsorship does not come cheap. Arby’s complete embrace of and commitment to understanding eSports and the culture that has built up around the game CS:GO, ensured a level of fan engagement that ultimately justified the price of sponsorship. At the ELeague final at Atlanta’s Fox Theatre, fans could actually be heard chanting “Arby’s.”

A wealth of opportunities

The eSports industry is still maturing. For casual gamers, new viewers and brands, the landscape of eSports can be difficult to understand. For example, often the games that rake in the most profit are not the games that attract the most loyal, or the most engaged fans. In addition, while interest in the industry is growing rapidly, there are still few formal opportunities for revenue generation.

That said, data from Nielsen suggests that around 50-60% of eSports enthusiasts in major Western markets consider themselves brand-friendly. This is the time for brands to get involved, there is a huge community of digitally active, loyal and engaged fans open to sponsorship deals and brand partnerships, and the industry is still relatively commercially untapped. While a more in depth understanding of your audience might not necessarily guarantee success, as Craig Barry, EVP and Chief Content Officer at Turner Sports explains; “if you integrate your brand and you’re supportive of the ecosystem and the community, then they’re going to embrace and support you.”

The fight for relevance on social begins on the dark side…. on Facebook Messenger

January, 2018. As it does most months, Facebook sets a new record for market capitalisation. At this point, they’ve already…

Star (rating) Wars: Battling for truth in the world of reviews

A rise in the number of fake reviews being shared online is threatening to kill consumer confidence in brands. Instilling…